Jeff Bezos will be flying to space on the first crewed flight of the New Shepard, the rocket ship made by his space company, Blue Origin. The flight is scheduled for July 20th, just 15 days after he is set to resign as CEO of Amazon.

“Ever since I was five years old, I’ve dreamed of traveling to space,” Bezos, 57, said in a Monday morning Instagram post. “On July 20th, I will take that journey with my brother. The greatest adventure, with my best friend.” 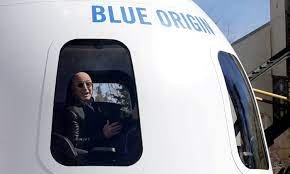 If all goes according to plan, Bezos — the world’s richest person with a net worth of $187 billion — will be the first of the billionaire space tycoons to experience a ride aboard the rocket technology that he’s poured millions into developing. Not even Elon Musk, whose SpaceX builds rockets powerful enough to enter orbit around Earth, has announced plans to travel to space aboard one of his companies human-worthy crew capsules.

Branson has long said he would be among the first passengers aboard Virgin Galactic’s rocket-powered plane, but that flight is expected to take place later in 2021.

Blue Origin’s flight crewed flight will see the company’s six-seater capsule and 59-foot rocket tear toward the edge of space on a 11-minute flight that’ll reach more than 60 miles above Earth .After six years of extensive and often secretive testing of the rocket and capsule, called New Shepard, Blue Origin announced in May that it was preparing to put the first passengers in a New Shepard capsule.

Though the company has not announced how much it will sell regular tickets for, Blue Origin said one seat will be given to the winner of a month long auction  that’s currently in progress.