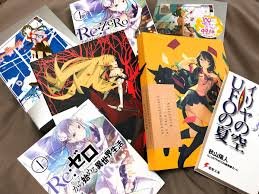 What is a light novel?

A light novel is a style of Japanese novel targeting teenagers and young adults. These novels contain mostly illustrations in anime or manga style. They are usually published in bunkobon size (A6 – 105 x 148mm). Light novels are not very long. The length is comparable to a novella in US publishing terms.

Light novels are very popular in Japan as you can see in Japanese bookstores.

Where does the term come from and what does it mean?

The word “light novel” is actually not an English word. It is a wasei-eigo (literally translated “Japanese-made English”) which is a Japanese term formed from words in the English language.

The term is everywhere used where you read such novels. In Japan you will use the word raito noberu (sometimes also ranobe or rainobe as an abbreviation) which is the Japanese term of light novel.

What is the difference between a novel and a light novel?

In short: Light Novels are usually shorter and they also contain few illustrations. In addition they are easier to read. This is particular because the text contains much simpler and easier to read modern kanji.

The illustrations are mostly at the beginning of capitals or when a new characters respectively a new place is described. On the picture below you see an example on how a light novel is build up. Left an image from the scene and to the right the text to read.

The reason because light novels are styled like anime or manga is because of their history and they are actually from Japan.

Light novels are an evolution of pulp magazines. To please their audience, in the 1970s, most of the Japanese pulp magazines, which had already changed from the classic style to the popular anime style covers, began to put illustrations in the beginning of each story and included articles about popular movies, anime and video games.

The narrative evolved to please the new generations and became fully illustrated with the popular style. The popular serials are printed in novels.

In recent years, light novels’ stories have been popular choices for adaptation into manga, anime, and live-action films, though in the case of the former two, usually only the first two novels are adapted.