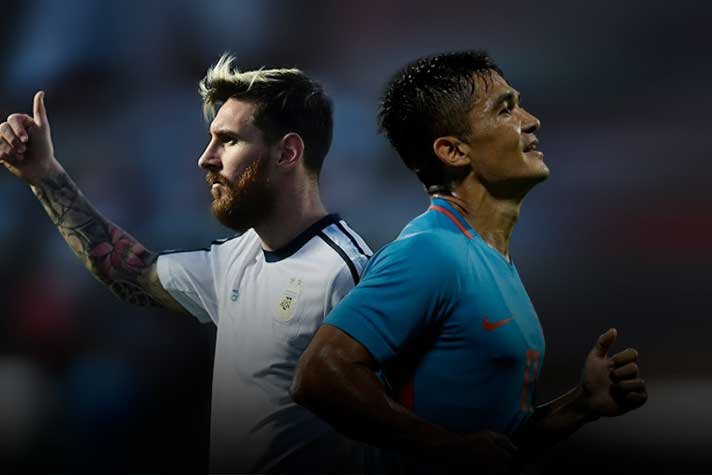 Indian football talisman Sunil Chhetri has surpassed Argentina’s global superstar Lionel Messi to become the second-highest active international goal-scorer with 74 strikes. The 36-year-old Chhetri achieved the feat with his brace against against Bangladesh in the joint preliminary qualifying round match for 2022 FIFA World Cup and 2023 AFC Asian Cup on Monday night. The seasoned striker, who helped India register their first win in six years in World Cup qualifiers, now stands only behind Portugal’s Cristiano Ronaldo (103) in the active international goal-scorers list.

Chhetri leads Barcelona star Messi by two goals and sits a place above Ali Mabkhout of the UAE, who is third on the list with 73 goals to his name.

Messi scored his 72nd international goal in a World Cup qualifier against Chile last Thursday, while Mabkhout added to his tally against Malaysia, also last week.

At the Jassim Bin Hamad Stadium on Monday, Chhetri broke the deadlock in the 79th minute when he headed in Ashique Kuruniyan’s cross from the left, and then sealed the victory by curling in a shot from long range in added time.

The India captain is also just a goal away from entering world football’s all-time top-10. He is behind Hungary’s Sandor Kocsis, Japan’s Kunishige Kamamoto, and Kuwait’s Bashar Abdullah, who all have 75 goals.

Delighted with the team’s victory and Chhetri’s record, All India Football Federation (AIFF) president Praful Patel lauded the captain for leading from the front.