Marvel’s latest show Loki is on a roll !!

The second episode of Loki, Marvel’s third venture with Disney+Hotstar released on Wednesday, June16, and it’s the beginning of the chaos. The mystery is getting deeper with each episode.

After the pilot episode of Loki became Marvel’s most watched premiere last week, it’s second episode continued to charm, much like the protagonist of the show has charmed the TVA.

While the First episode was equally funny and emotional, the second episode, that dropped on Wednesday followed the suite, and actually outran the pilot. The second episode, titled as “The Variant” was more spooky with mind bending elements. It gave us a deeper insight into what is in store for the MCU fanatics and how this show will turn out to be!!

With the first episode ending with Mobius revealing that the TVA brought Loki on board to catch a variant who is none other than Loki himself, and who’s killing TVA’s minutemen, leaving the spectators confused. The second episode started with a quick recap of the previous episode and then moved on to a Renaissance Fair in Wisconsin (in 1985) where a minuteman is taken hostage. The audience and the TVA both realise that the ‘variant’ version of Loki is more evil than the one they had apprehended. All of the TVA thinks Mobius’ efforts to reform the original Loki are futile and will backfire.

But Loki shows his usefulness in the backdrop of a Sherlock Holmes-esque music and  explains where and how the variant Loki is hiding. He comes to the conclusion that the variant hides in the middle of apocalyptic events to shook the TVA off of his trail. Followed by some comedic relief by the duo of Loki and Mobius, the TVA moves to the 2050s, much to the reluctance of judge Ravonna, to Haven Hills, Alabama a corporate town owned by Roxxcart until the place is wiped out by a hurricane. The TVA alongwith Loki reach to scan for the Variant, when hunter B-15 is taken over by the variant Loki and distracting the TVA, the variant bombs the sacred timeline, causing the formation of multiple branches. During the extended credits of the show, the variant exposes its real identity ! 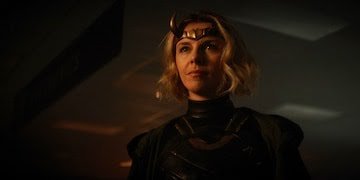 The episode ends with Loki following the variant through a warp door, as Mobius and the TVA helplessly watch.

Expect the ‘expected’ with this Show

It is incredibly hard to predict anything regarding the TVA, or the series in particular. While the first episode showed infinity stones being used as paperweights, Mobius provoking Loki to show what works inside the mind of the God of Mischief and explaining “What is the TVA?”, the second episode dealt with questions of Nexus events, theory of ‘apocalypse time branch’ and why Mobius has a jet ski magazine on his desk and revealing a new character played by Sophia Di Martino by the end of the 50 minute episode.

The chemistry between Owen Wilson’s and Tom Hiddleston’s characters is very much enjoyable. The blossoming bromance of Mobius and Loki(much like Sherlock Holmes and John Watson) is already the talk of the town.

The direction is top notch, Kate Herron really knows what she’s doing, and Tom Hiddleston with his acting skills and dialogue delivery is making the already fan favourite Loki Laufeyson all the more adorable. With all the mind-hunting and time travelling endeavours in this episode, none of us can quite expect how the next episode will turn out to be, but one thing’s for sure, audience are hooked to this show and are already waiting for the 3rd episode.

The next Wednesday cannot come faster….