Netflix’s Spanish crime thriller series and the international hit, Money Heist will air its last season this year bringing an end to one of the most exhilarating heists of all time.

The cast and the crew wrapped up the shooting of the finale season after posing together for one last time.

Tokyo has continued to narrate seasons three and four of La Casa De Papel and fans think they’ve uncovered a huge clue confirming the end of the show. A compelling fan theory suggests that Tokyo might be the only heist member that would live through the events at the Bank of Spain. 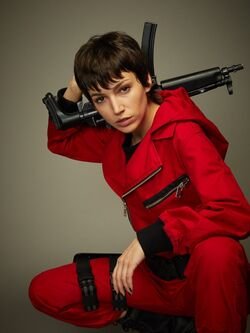 A Twitter user based their theory on the fact that she’s the only one narrating the story from season 1. To top it off, she is narrating the events in the past tense and tends to know every future move. “What if at the end of La Casa de Papel, Tokyo will be the only gang member alive and that’s why she’s narrating all the current seasons,” the tweet suggests.

To back the theory, a Reddit user pointed out that Tokyo might be narrating the event from prison. Another wrote, “My personal theory is she’s telling the story from prison.” While yet another user also speculates that Tokyo could be enacting as the new Professor and training a new team. “Then this could set up for a new series or something, kinda like a spin-off,” the user points out.

While the show has had episodes focusing on other characters and offered flashbacks into their lives, Tokyo remains the most integral and controversial character. From the beginning, Tokyo has been the narrator of the show and the theory that Tokyo could be the last survivor gained a lot of attention and to be honest yeah it does make sense, right? Money Heist could end with the reveal that Tokyo has been telling their story – whether in an interview with the police, or a declaration to the public. And it would certainly be in keeping with the show’s love of melodrama if Tokyo’s story turned out to be a requiem for the fallen robbers.

However, one fan hit back with the theory that as Money Heist actually ended after season two – before Netflix picked it up – it didn’t mean anything.

They posted: “But, it’s very unlikely that the writers will kill everyone, and the theory about Tokyo narrating this story is weird because the show ended in S2 and it didn’t matter that she was the one narrating.”

“There was a part in S4 about how Nairobi’s death and funeral showed the people that the heists were not without risk and that the team wasn’t invincible and I think it had the expected effect on us because we now believe that anyone can be killed off and there is no way to tell who lives and who dies.”

Although these theories do sound compelling what do you think of them? Let us know in the comment section.