The Vampire Diaries, The Originals, and The Legacies producer Julie Plec, and  Marguerite MacIntyre (aka Liz Forbes or sheriff Forbes ) have confirmed a series of Richelle Mead’s Vampire Academy books which will air on  Peacock. 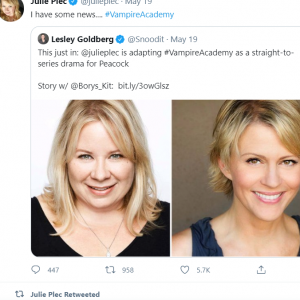 On May 19, it was announced that a TV adaption of the Vampire Academy is heading to the NBC Universal streaming service with 10 episode order. Vampire Academy fans were literally asking this for a very long time and now it’s happening. They expect it to be better than the famous Vampire Diaries show. And the fans are literally freaking out as they can’t wait to see their favorite characters on the big screen. But this is not the first adaption, there was a movie in 2014 which was well-received but did not satisfy the fans. This movie follows the exploits of a half-vampire teenager Rose as she trains to be the guardian of her immortal bestie Lissa.

“Julie Plec created one of the biggest fan-favorite Vampire Diaries and its spin-off The Originals and the Legacies, and we are excited to deliver this passionate audience brand new story on Peacock”, Liza Katz, president of scripted content for NBCUniversal and Streaming, said in a statement.

Julie is known for binge-able, enthralling dramas and we know Vampire Academy viewers right on the edge of their seats. So, this Vampire Academy is most likely to air on peacock the next year because it sounds like they’re in pre-production but there are no leads about the cast yet.

GET READY TO WATCH YOUR FAVORITE CHARACTERS ON THE BIG SCREEN.