The spread of the COVID virus has also resulted in shortage of medical equipment across the country. While many people died due to lack of oxygen, the price of oxygen sold in the market rose sharply. Moreover, there was a shortage. If a corona sufferer has less than 95 percent oxygen deficiency, respiratory damage will occur. Oxygen level can generally be determined by oxymeter . Those who do not get it can know oxygen levels through Android and iOS apps. Let’s find out what 5 processors are, which calculate oxygen levels with camera and cell phone light.

Careplix vitals :
Developed by Kolkata-based Care Now Healthcare Startup, the app is available on Google and Apple Star. Register by email ID. The flash light of the phone calculates the body’s oxygen levels. During the test, it was found that the app recorded accurate dosage compared to the records of 2 different companies in the medical store .

MFine :
The MFine app, designed to be used only on Android cell phones, connects users to the doctor online. Home testing and medical services can be availed through this app. The oxygen level is measured with the help of camera and flash light. Compared to oxy meters, the results were almost identical.

Pulse oxymeter tracker :
The Pulse Oxy Meter processor, which can only be used on Android phones, has been downloaded for more than 1 lakh to know the oxygen level. Although oxygen levels are not monitored, the data will continue to be recorded. You can find out the oxygen levels.

Ezvitals :
The app, like the Pulse Oxymeter tracker, does not record oxygen levels, but it is used to store information recorded in the oxy meter. Available in both formats– Google Play Store and Apple Store. It also helps in sharing physical information with medical consultants. The management has told them not to take the app’s data in times of danger . 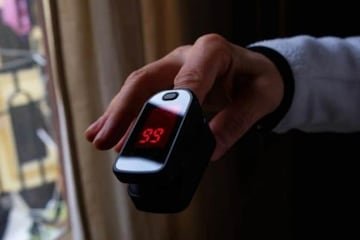